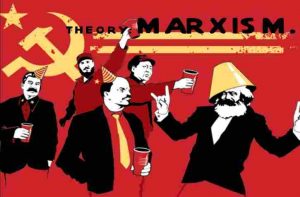 At 210 degrees, water doesn’t boil, but at 212 degrees, it’s at full boil.  Those two degrees are really, really important.  This describes our current political climate.

America is getting heated up.  The temperature has been gradually and deliberately increased by the well-planned and orchestrated progressive, left wing of the Democratic party.  It is also increasingly clear that those in power with the Biden-Harris administration are implementing a major change effort in our political process based on Marxist ideology[1].  That includes not only their preferred ways of putting Government above the Individual (Biden just stated that “government is the people”) but applying a process over the last 50 years of slow, consistent messaging of their untruths and lies (see prior blog on “The Progressive’s Road to Biden).

My brother, a staunch Republican, sent me a letter recently that drove this point home to me.  I asked him if I could share it with others as I felt it captured the reality of what happens when you reach the boiling point.  Here is brother Bob’s letter to the head of customer service of his local newspaper:

Thank you for recognizing my 38 years of loyalty. The reason for my cancellation is a sad one. Over the years, from the time I read the Fort Lauderdale News, I saw your paper’s journalistic slant on politics go from balanced leaning towards liberal to full out, far left. Rosemarie O’Hara’s departure was a welcomed sight for us moderate conservatives who still are willing to subscribe to your paper. However, her replacement will more than likely pick up where she left off. I cannot recall one editorial piece under her leadership which recognized anything positive the former president did in four years. The same goes for our current governor. In fact, I have little doubt that if Andrew Gillum ran against Desantis in 2024, the Sun-Sentinel would, once again, endorse Gillum, despite his latest fiasco. The only Republican candidate I recall being endorsed last year was Chip Lamarca. I suppose the paper needed a token candidate on the right and Chip was unbeatable anyway.

I understand why the majority of media outlets lean liberal; you only need to look at the First Amendment. When I was in college, I was a registered Democrat. Carter was president and we students knew he would never reinstitute the draft and send us to Iran. We were one or two issue voters and we didn’t have a clue what was really important for our country’s ability to flourish as a free market, capitalistic, democratic society. On January 20, 1981, our professor walked into the classroom and said, “After 444 days, the hostages in Iran have been released.” I looked at my Democrat friends and asked, “I wonder what the Ayatollah Khomeini knows about Reagan that we don’t.” In 1983, I purchased my house at 24 years of age. My mortgage rate was 12.5%. I had utility bills, insurance bills and all the other expenses associated with independence and home ownership of a single man. I worked hard. I lived within my means and never relied on government assistance. Reaganomics was in full swing, interest rates were declining from the 18% highs, Iran was no longer an imminent threat and the economy looked optimistic. I had to register to vote in Broward County and I did so as a Republican. Like Reagan said, “I didn’t leave the Democratic party, the Democratic party left me.”

I don’t expect the Sun-Sentinel to become the New York Post. I just hope that if there is a take- over of the paper in the coming year, the new focus will be an outlet for news that is balanced and as fair and non-biased as one could expect from main stream media. It helps to have a Cal Thomas op-ed from time to time. But let’s face it, his is only one short piece and he leans far right. I am sure it is easy for the majority of your readers to loath his point of view on any “point/counterpoint” article.

My father was a plant manager of a steel foundry and a Republican. My mother was an executive assistant for a U.S. Congressman. The Congressman was a Democrat and so was my mother. My parents were married for more than 40 years. There was no political animosity. We used to watch Walter Cronkite on the evening news. His broadcasts seemed so fair and balanced that we could not tell if he was a registered Democrat or Republican. Isn’t that the way the news should be told? I believe our current gridlock in politics is fueled by biased media outlets from both the far left and the far right. In a perfect world, the media would be the bridge that unites us with the truth, not divides us by supporting only one side while condemning the other.

Going out to my driveway at 6 A.M. every morning to get your newspaper is something I have done since I was in Boca Raton High School. I will miss it very much. What I will not miss is how angry the front page and the editorial page have made me feel by 6:30 on so many mornings of late. You must know that you alienate those of us with contrasting points of view. It is difficult to justify endorsing that alienation by continuing to subscribe to it at my cost. Perhaps the new organization will experience some sort of an epiphany and reverse the current political agenda towards a more balanced approach. If that ever happens, I would be happy to resubscribe.

Wake up fellow Americans before we raise the temperature another degree and hit the boiling point as a country.  Take action, speak up, expand your sources of information and join others with common interests as we can’t do this alone.  We are fighting for our freedom and the future of the next generation and we are getting close to a full boil.  It’s not like a hoard of pro-American activists are coming over the hill.  It’s up to you and me and all of us working together for America– just like the progressive left has always done to change America!