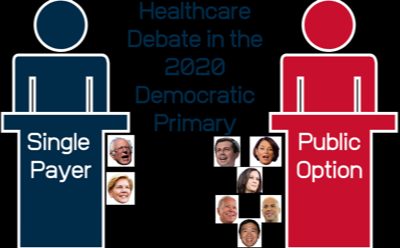 By Lanhee J. Chen and Daniel L. Heil – Fellows at the Hoover Institution.  They conclude “Taxes for the typical middle-income family would rise by an inflation-adjusted $3,900 to pay for the public option and keep debt below 150% of GDP in 2050.”

Joe Biden has promised that no families with incomes under $400,000 will see tax increases if he is elected president. But that’s a promise he won’t be able to keep if he gets his way and Congress creates a government-run health insurance plan—a public option.

Mr. Biden and other supporters of the public option argue it would be a relatively modest change to the nation’s health-care system because, unlike single-payer proposals, it would add nothing to federal deficits. But once enrollees and health-care providers start applying political pressure to keep premiums low, taxpayers would be on the hook. Medicare’s legislative history is filled with broken promises to restrain spending.