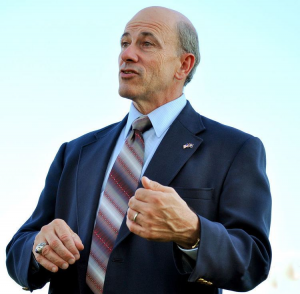 “Freedom is never more than one generation away from extinction. We didn’t pass it to
our children in the bloodstream. It must be fought for, protected, and handed on for them
to do the same, or one day we will spend our sunset years telling our children and our
children’s children what it was once like in the United States where men were free.’,
This fiscal committee item has precipitated an incredible amount of public sentiment in
opposition. lt may well be a defining vote for those in elected office, and is deserving of our
most careful scrutiny.

The department is doing what it believes it must do. lts mission is “To join communities and
families in providing opportunities for citizens to achieve health and independence.” lts
intentions are understandable.

But we are not the department. We are the elected representatives of a people that entrusts to
us their freedom, the freedom of their children, and the freedom of future generations of our
people. As with all of us, my mission is “to faithfully and impartially discharge and perform all duties
incumbent on me as a State Senator, according to the best of my a-abilities, agreeably to the rules and
regulations of this constitution and laws of the slate of New Hampshire. So help me God.
To us falls the obligation of holding government accountable, of protecting and defending first
and foremost the freedom of our citizens against the inevitable erosion that government is
capable of producing, no matter the beneficence of its intent.

Our founding president, George Washington, has been credited by some with stating that
“Government is like fire – a wonderful servant but a terrible master.” lmplicit in this statement
is something we as legislators are not always diligent in considering whether a program
infringes on the natural and constitutional rights of our citizens. But we as the elected
guardians of the right to life, liberty and the pursuit of happiness bear the grave responsibility
not only to look at the efficacy of programs presented for consideration, but their actual and
potential impact on the freedom of this and future generations.

Before us today is an item in which the contract under consideration clearly articulates that the
federal government can, at an indeterminate time in the future, impose limitations and
conditions on the government and the people of New Hampshire. With all due respect to the
opinion of Attorney General Formella that the terms in the contract under consideration are
not enforceable, and aware of the legal impotence of the nonbinding resolution adopted by the
Executive Council, it falls to this committee to weigh the potential benefit of increased
government efficiency in managing the details of an Executive Order that shreds our natural
and constitutional rights against the threat that Order, and this program, represent to freedom.

I have served my country as an officer of United States Marines and as a sworn Special Agent of
the FBl. I have traveled the world as a military officer and the captain of incredible engines of
commerce, and l’ve seen firsthand the consequences of tyranny. l’ve been to China and
Venezuela and Pakistan and Kashmir and Hong Kong. In China, the government monitors and
assesses the worthiness of citizens to partake of the benefits it doles out. lt decides whether
individual citizens are deserving of employment. lt decides how many children a family may
bring into the world. lt controls every aspect of the lives of the people over which it rules.
We’d like to believe that our federal government would never do such things.

Under the terms of the grant under consideration, the department states that data is
deidentified and aggregated. But under the terms of that same grant, this protection remains
only until the CDC requires the disclosure of that identifiable data at some point in the future,
and for some purpose unknown to us and utterly beyond our control.