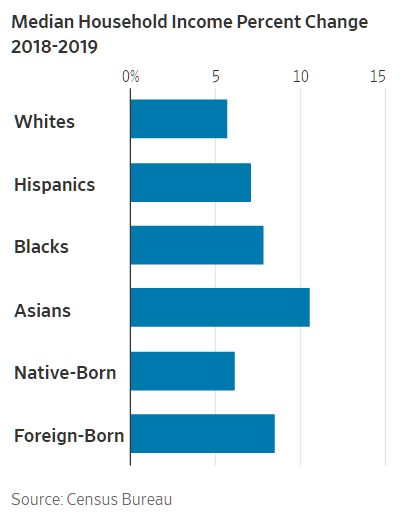 The Wall Street Journal on September 17, 2020 reports on the recent report from the Census Bureau.  The complete editorial is HERE.

In case you missed it, and most of the media did, the Census Bureau reported Tuesday that the median household income in 2019 grew a whopping 6.8%—the largest annual increase on record. While this year’s government-ordered lockdowns will erase these gains in the short term at least, it’s still worth highlighting how lower-income workers and minorities benefited from faster growth and a tighter labor market before the pandemic.

Here are some highlights.

These income gains weren’t magical. Policy changes mattered. The Obama Administration’s obsession with income redistribution and regulation retarded business investment and economic growth. This in turn led to slower income growth for most Americans. Business investment and hiring increased amid the Trump Administration’s deregulation and the GOP’s 2017 tax reform that unleashed animal spirits. New business applications increased twice as much during the first two years of the Trump Presidency versus the last two Obama years, other Census data show.