Sleepy Joe wants to unite us, but continues the vitriol. 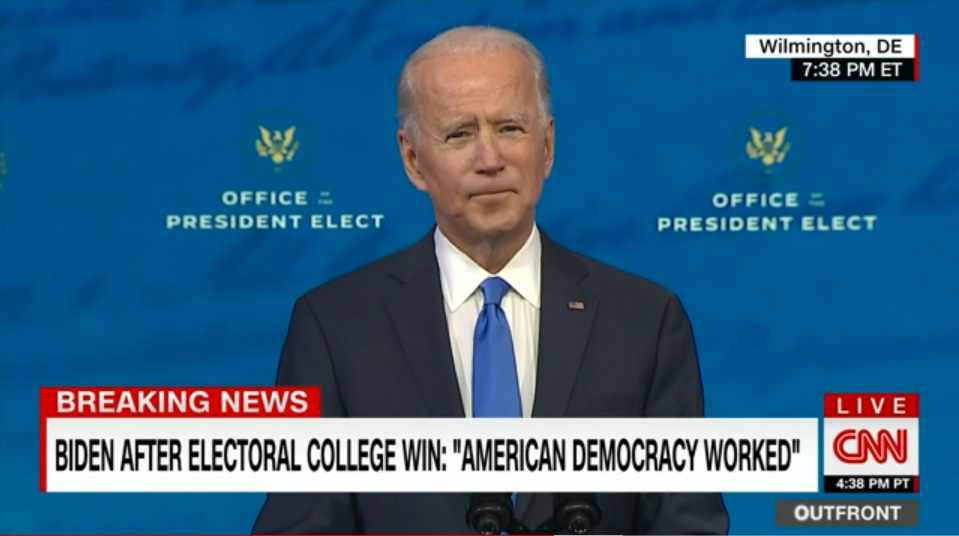 On Tuesday, December 14, 2020, in a speech after the Electoral College made him officially president-elect, Joe Biden said it’s time to “turn the page, to unite, to heal.” He’s made similar remarks several times over the past month. Does he really want the country to come together?  If actions speak louder than words, that’s hardly what he wants. 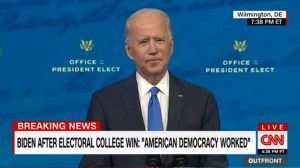 But, I ask you, if someone beat the ever living hell out of you for a year, calling you the nastiest of names all of a sudden says “Hey, let’s bury the hatchet, let’s be friends, it’s time to turn the page, to unite to heal”, I think you’d be a bit skeptical and not quick to accept the offer.

But, then he doubles down on the nasty words:

“This legal maneuver was an effort by elected officials and one group of states to try to get the Supreme Court to wipe out the votes of more than 20 million Americans in other states and to hand the presidency to a candidate who lost the Electoral College, lost the popular vote and lost each and every one of the states whose votes they were trying to reverse. It’s a position so extreme, we’ve never seen it before,” he said.

The President-elect, who paused throughout his remarks several times to either cough or clear his throat, called it “a position that refused to respect the will of the people, refused respect the rule of law and refused to honor our Constitution.”

But, wait a second. The Trump people didn’t act like Biden supporters and loot, pillage and burn down cities. No, they filed lawsuits. I ask you, since when is the filing of a lawsuit a refusal to respect the rule of law or the Constitution? If Biden thinks that doing so violates the Constitution then we are in for a very long Biden administration.

It’s not that the lawsuits were without content. The allegations are serious. In a recent poll, fully 36% of independents and registered democrats answered yes to the question “Do you think the election was stolen from Donald Trump?” There must be something there.

Over 1,000 affidavits, signed under the penalty of perjury, were brought forward in various legal challenges, each with serious voting irregularities. Some were egregious such as the truck driver who alleged that he drove over 100,000 ballots from New York to Pennsylvania and poll workers who testified seeing people scanning ballots dozens of times. If Biden really wanted to bring the country together, you’d think that he’d step up and say something like “We know the election wasn’t perfect. We know there were some irregularities and you have my word that as president I will ensure the integrity of every election from now on”.

Okay, so I acknowledge that figuring out what went wrong wouldn’t overturn the election, but don’t we want to have confidence in our elections? I know I do.