In 1776, our Founding Fathers signed the United States Constitution that laid out a form of government to ensure the security and freedom of the American people.  In that same year, Adam Smith, a Scottish economist and philosopher, published “Wealth of Nations.”  Smith understood that the economic model underlying the success of our new democracy must also ensure access to free markets.  As the Father of Capitalism, his free market economic theory was based on promoting self-interested, competition in a free market that would benefit society as a whole.  By keeping prices low and creating incentives that played to the interests of individuals in creating a wide variety of goods and services, Smith proposed that this would lead to economic prosperity across society. 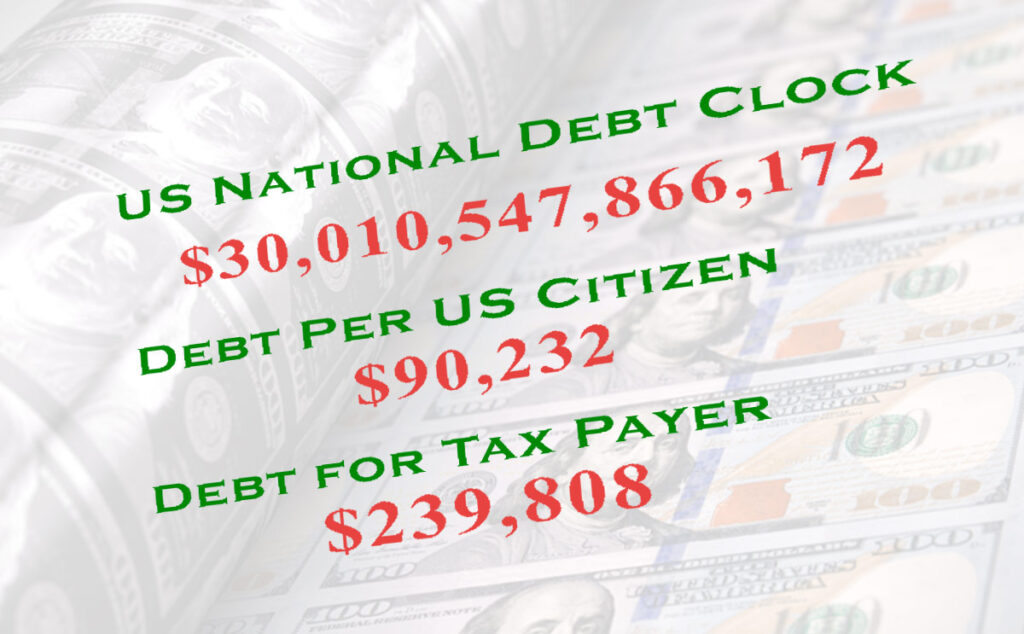 Smith warned about the collusive nature of business interests forming monopolies and fixing prices.  He cautioned against a business-dominated, political system that would give special protections or privileges from government to businesses and industry in exchange for schemes to influence politics and legislation.  Smith felt these shenanigans would ultimately conspire against the best interests of consumers with high prices and limited goods and services.

Fast forward to today.  Currently, there are two economic measures that everyone is watching closely as they reveal how our security, our freedom and our free markets are operating for the greater good of society: federal debt and inflation.  There is an excellent article in the Wall Street Journal that provides a lot more detail.

The Federal Debt – As a result of both Democratic and Republican administrations, the U.S. national debt has blown through the $30 Trillion mark.  That’s $86K owed by every single person (not household) in America or about $350,000 for a typical family of four.  The federal government pays interest on that debt of about $560 Billion/year out of its federal budget (currently about $14.7 Trillion).  That’s the equivalent to the total budget for the Veterans Administration and getting close to the size of our Defense budget.

Many prominent free-market economists, Art Laffer among them, is calling this fiscal irresponsibility.  The US Constitution granted Congress the responsibility to regulate the value of money as a dependable measure so that free market interactions would lead to optimal economic outcomes. Instead, our national government has engaged in excessive government spending (running up debt that is twice as much as annual revenue) and Congress has outsourced to the Federal Reserve a mandate to cover this spending with excessive debt.

Inflation – Inflation is too many dollars chasing too few goods and services, and it is considered a money-printing problem.  40% of all money the U.S. has ever created was printed in 2020.  It is also another form of taxation that affects all Americans in their consumer purchases.  This was primarily the work of the Federal Reserve addressing and perhaps overreacting to the impact of the pandemic.  Kevin Walsh, a former member of the Federal Reserve Board, states clearly that inflation is a choice… for which the Federal Reserve is chiefly responsible.”

As a government agency, the Federal Reserve has a dual mandate for the monetary policy of the country to achieve price stability (keeping inflation under 2%) now running at 5.8% and maximum employment (keeping unemployment about 4%) now running at 4%.  It is also worth noting that inflation formulas changed in 1980 and 1990 leading to an underestimate of the actual inflation.  Based on the 1990 formula, the inflation rate would be 8% and on the 1980 formula it would be 13%.

Once again, our Congress has allowed the Federal Reserve to blur the responsibilities between the fiscal policy of our legislature and the monetary policy of the Fed.  Judy Shelton, an economist, has stated that the Fed has too much power as a government agency run by unelected officials.  The Feds quantitative easing program during the pandemic of 2020 drew them into lending directly to U.S businesses, cities and states, a realm they had never gone before or wanted to go.  The Fed dropped trillions of dollars of debt into the economy that primarily favored the rich versus the working class creating even further wealth inequality.  Even now in the first quarter of 2022, big businesses, cities and states are flush with cash that they never needed.

Social Consequences – There is an important voice of reason that has been vocal in the last year and that is Joe Manchin, the Democratic Senator from West Virginia.  In a widely read editorial in the Wall Street Journal on February, 2021, Senator Manchin shared the following:

“An overheated economy has imposed a costly inflation tax on every middle and working-class American.  Over the past 18 months, we have spent more than $5 Trillion responding to the Corona Virus.  I, for one, won’t support a $3.5 Trillion bill without greater clarity about why Congress (specifically Joe’s Democratic colleagues) are rushing to spend another $3.5 Trillion.”  Senator Manchin also mentioned the former chairman of the Joint Chiefs of Staff, Admiral Mike Mullen, as saying that “the national debt is the biggest threat to our national security.” Manchin closed by saying that “Ignoring the fiscal consequences of our policy choices will create a disastrous future for the next generation of Americans.”

What we need to do is voice our concerns in the upcoming mid-term elections.  Vote only for candidates who truly believe in the importance of fiscal responsibility as the key to economic stability and the freedom and security that provides. Learning the basics about federal debt and inflation helps to check out a candidate’s position on the role of Congress versus the Fed and how we rein in their excessive spending and debt decisions.  It is a choice and now it is our choice that matters most!